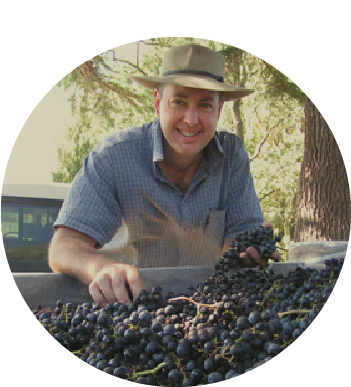 The vineyard is located in a small but exclusive wine-growing area that has developed a reputation for outstanding wines for a number of reasons.The micro-climate is unique, with high sun-shine hours, southerly protection from Te Mata Peak and its foothills. The proximity of the Tukituki River possibly reduces the severity of frosts, while the gradient of the site (5 metres of fall over 150 metres) ensures rains tend to run off the vineyard.A number of deep pits were dug to identify the soil layers and make decisions on the optimum varieties and soil treatment necessary for growing premium wine grapes. Tuki Vineyard soil is topsoil on sandy clay upon a sandstone pan over river shingle. The sandstone pan was deep ripped and cross-ripped with a 1.2 metre spike towed behind a massive bulldozer, to open the sandstone pan for optimum drainage and to allow the vines to reach the layer of silt and clay from the old river shingle - reputed to be partially responsible for the superb flavours of wines coming from this site. Holes of one metre diameter were bored two metres deep (down beyond the river shingle layer) at the bottom of the vineyard and filled with shingle to help quickly disperse water run-off.We applied 30 tons on organic compost per hectare prior to planting. We also planted buckwheat and wildflowers down a number of the rows to try to attract beneficial insects. The soil was also treated to a drench of organic compost tea, to increase and invigorate the biology of the soil. We believe healthy vines are more able to naturally resist disease (prevention is better than cure) and we avoid chemical sprays wherever possible.The vine varieties, clones and rootstocks were selected based upon their suitability for the site:ChardonnayMalbec is BDX 595 clone on 101-14 and Riparia Glorie (RG) rootstock.Merlot is 347 and 181 clones on 3309 and RG rootstock.Cabernet Franc is 326 and 214 clones on 3309 rootstock.Amongst the factors considered in the choice of clones and rootstocks were the timing of each variety's fruiting and ripening in relation to the local micro-climate, and the budburst timing and vigour of each rootstock in relation to our soil type.The vine trellis system selected was VSP (Vertical Shoot Position) since it helps control vigour and is easy to manage. Row spacing was established at 2.3 metres, with vine spacing at 1.5 metres. The rows are planted North to South on a gentle North facing slope, maximizing the sunlight into the vines. The headlands are relatively small, which is fine since we perform a selective hand-pick, rather than a non-selective mechanical harvest.Pruning and bunch-thinning is conducted to prevent over-cropping, with constant attention to the health of the vines. Leaf plucking is performed on the red varieties following veraison, to both increase airflow around the grapes and reduce disease pressure that can accompany too much shading.The decision to pick each variety is a consultative process between the viticulturalist and the winemaker. Essentially, it is a battle of nerves, constantly monitoring the grape flavours, the increasing Brix (sugars) and the drop in T/A (Titratable Acids) along with a corresponding increase in pH. With a close watch on the weather, the decision to pick is often at only a single day's notice. Tuki Vineyard is fortunate to be small enough to perform a hand pick of any one variety in a matter of hours. Although hand picking is more costly than mechanical harvesting, it allows us to include a QA process that mechanical harvesters can't match - we inspect every single bunch of grapes as it comes off the vine and accept only grapes capable of producing great wine.We are similarly fussy at the winery. Within hours of being hand picked, the tons of grapes are de-stemmed and crushed. The Merlot, Malbec and Cabernet Franc juice sits separately on their skins throughout fermentation to maximize individual flavours, bouquet and wine colour. The fermented wine also undergoes Malolactic fermentation before being racked into French oak barrels to fine and mature until the following year.The final stage is the blending decision, where the individual characteristics of the finished wines are contemplated and blending ratios are decided. The total process from the flowering on the vine to bottling the finished wine takes up to two years - for a bottle that will typically be enjoyed in under two hours!